OMG, I don’t even know where to begin, I just saw the Devine Miss M!

Okay, let me catch my breath!  Hello Dolly is opening at the Shubert Theater in April.  Everything is sold out for months.  The production is in Preview right now will full cast and costume.  Preview tickets can still be difficult to come by, prices are lower and there is a possibility that lines may change between preview and Opening night.   Preview tickets are a good way to see Broadway shows before Opening Night at a discounted price.

Preview for Hello Dolly, on the nights Bette Midler is performing has been sold out for a while.  Earlier this week Tip was browsing the website, and two seats opened up on the front row of the mezzanine level.  He grabbed them.  It was a rare opportunity.

The Shubert is one of the old theaters and has been hosting Broadway theater since 1913.  Anyway, back to Miss M…

At 71 years, Bette Midler still brings energy, humor, and personality to her role.  It must be infectious, because the rest of the cast seem to feed off her energy.  David Hyde Pierce (Niles of Frazier), played the male lead.   The set was colorful, elaborate, and bright to match Miss M’s personality.  The dances were crisp, the music was precise, and it all seemed to swirl Midler into the classic role.

Oh, did I tell you that I love Bette Midler, and this is one more thing off the bucket list.   I won’t sleep tonight! 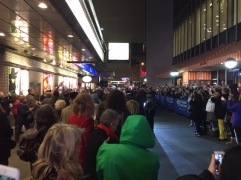 Photos:  1)The Shubert Theater (sorry no photo allowed during the performance). 2) Who says New Yorkers are not friendly.  We met these two who provided restaurant recommendations and tips on local shopping. 3) After the performance waiting for Miss M.