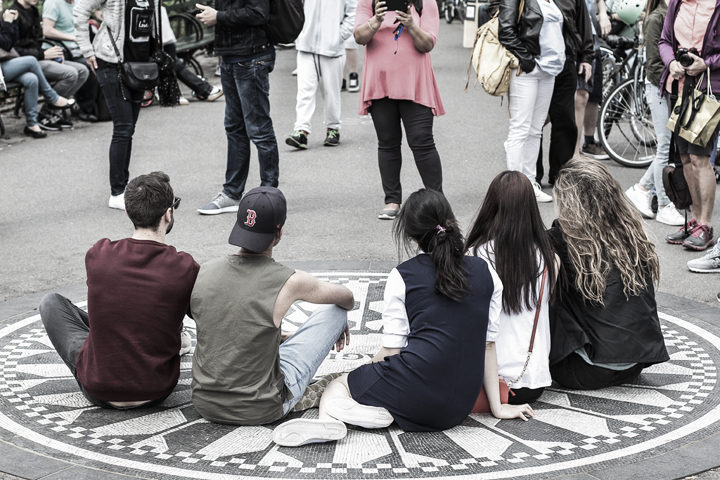 We were leaving Strawberry Fields, the John Lennon tribute in Central Park.  There is a crowd every day, despite the weather, all day long, despite the time.  Everyone is having a picture taken sitting next to the Imagine mosaic.  There is a crowd around the mosaic waiting their turn for a photo.  The area is surrounded by park benches, full of tourists watching this spectacle unfold.

On one of the benches nearby, a local is belting out Beatle songs on an acoustic guitar.   His guitar case is laying open on the ground holding a half dozen dollar bills.  He nods a thank you to each contributor dropping their money into his coffer.  The whole scene seems more reverent than commercial.

A few steps down the path sits a young man, a little disheveled, a few days from his last shave.  He has a homemade easel set up that reads: Bad Portraits $5, with a couple of samples clipped to the frame.

We both have a hard time passing by artists who are trying to carve it out, so we decided to have him do a Bad Portrait of Jerry.

I handed him a $20 and he went through his wallet for change.  He could only come up with $14.  I told him that would work.  He said he would give us a $6 portrait.

He went straight to work.  He meticulously trimmed the portrait paper, set it up on a clipboard and instructed Jerry to sit across the path on a bench facing him.  He leaned forward, studied her intently and then focused on the trimmed paper in his lap.  He sketched first in pencil, then in art ink.

As he worked, a parade of sightseers came by, some stopping to look over his shoulder to see his work.  He would look up, study Jerry, and then return his attention to the piece.

In a matter of minutes, he produced his work.  We both loved it.  I loved it because it showed the huge eyes Jerry had when we first met and she was looking at the world in amazed wonderment.  Jerry loved it because it made her look like she weighed about 20 pounds.

If you would like a Bad Portrait, you can find Joey McDevitt in Strawberry Fields.

16 thoughts on “The Bad Portrait Artist”