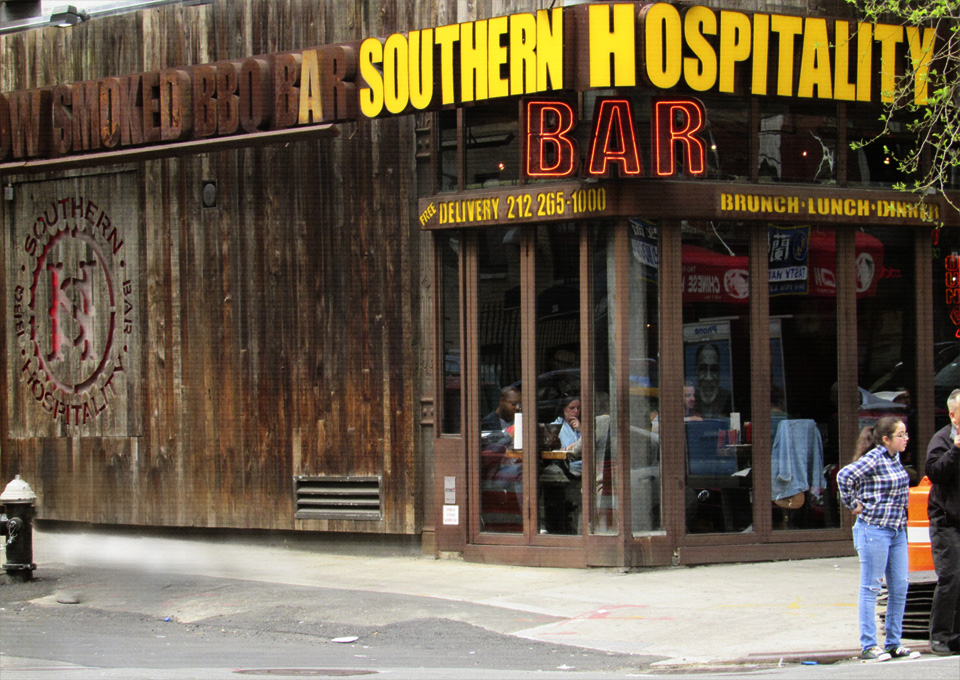 We were hungry for some “back home” food.  So we went exploring. We came across Southern Hospitality BBQ.  Wood floors, wood paneled walls, wrought iron railings, high ceilings, neon beer signs around the room.  It could pass for a barbeque joint anywhere in Texas.

We were seated.  An attractive young lady arrived with menus and said that she would be taking care of us tonight.  She left and soon returned with waters for us.  Jerry had questions.  Jerry’s Questions turned into comments and the comments brought more questions.  Pretty soon, we knew that Denise was a student in acting school, living in Brooklyn, moving into Chelsea, and working 3 jobs to support her drive be in film and TV.  She was moving to be closer to where she works and goes to school.

We thought it was interesting to meet an aspiring actress, working as a waitress in a New York restaurant and waiting for her big break.  This all seemed just so theatrical.  We were enthralled.  We wondered if she had to take off work for auditions.

Denise knew that we were from Texas, retired, had just moved to New York and were spending a year looking around.

Soon, Josh, the General Manager, came by.  He said that he heard there were BBQ experts in the house.  He was from North Carolina and we talked about the differences between Carolina, Memphis and Texas cooking styles and sauces.  He knew BBQ.  The meal was excellent.

We left with a complimentary dessert, a huge piece of double chocolate cake.  We took it back to the apartment and had it with Joyce’s ground coffee beans.  It was a fine ending.