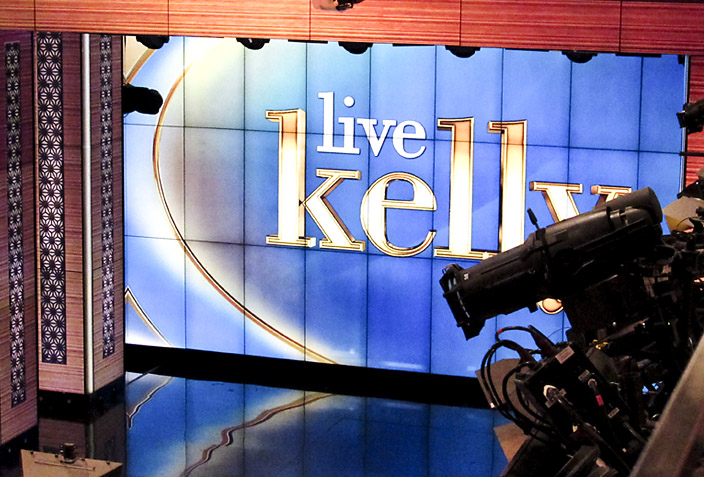 We were fortunate enough to get tickets to see Live with Kelly.  You have to sign up for tickets on-line and get either priority or general.  Because of my connections and influence, we got general.  This show plays live and it starts at 9 am Eastern.  Lining up for getting in starts at 7:15 am and closes at 7:45 am. We left the apartment at 6:30 to get a good place in line.

We stood outside the ABC studios at 67th and Columbus Ave lined up on either side of the sidewalk.  One line was for priority tickets and we were in the general line.  A truck parked curbside offered free coffee, hot chocolate, donuts, bagels and other breakfast items and snacks for those in line.  These were provided by the show for the audience members waiting in line.  The ushers and line supervision people were kind and engaging.

We were finally escorted inside where we went through screening, much like at the ballpark.  Then more standing in line.  Finally, we were allowed inside the studio.

The floor seats were almost filled, except for the end seats, so we opted to go upstairs.  There, we were assigned seats on the front row, almost mid set.  The entire ceiling was covered with studio lights and there were several (4 or 5) large studio cameras around the set.  In the middle was the familiar table and chairs for Kelly and her co-hosts.  For today, her co-host was a guy named Scott Wolf.  Not sure who he is, but he’ll be here all week.  He played a good story teller and straight man for Kelly.

I remember when Kelly signed on to replace Kathy Lee Gifford who was leaving Regis Philbin and the Live with Regis and Kathy Lee show several years ago.  I thought Kelly was cute and really funny.  She impressed me with her wit and bubbly personality.  I have always liked her but Jerry doesn’t care for her.  We have balance.

Sally Field was the first guest.  I have always liked Sally Field.  She has been a favorite since the days of the Flying Nun on TV.  She talked about her Broadway role in Glass Menagerie, and some of the things going on in her life.  She seemed happy and content.  Seeing her was like being able to visit with a favorite aunt.

The second guest was a young lady who is the voice of one of the Smurf characters in the new movie. I didn’t know her or anything about her.  She is one of the many new faces in the entertainment industry.

During the commercial breaks, things don’t shut down.  Kelly and her guests chat with the audience members, tell jokes and share stories from the entertainment world.  Even the producer (Gelman) and the director, get into the act by counting down the return to the show and calling up the applause.

Do you remember Charro?  She was frequently on the Tonight Show with Johnny Carson way back in the 70’s, and has recently been voted off Dancing With The Stars.  She was the final guest on the show.  She danced and Coochi Coochied with her partner today.  I’ll tell you what, for 71 years old, she was pretty damn good!