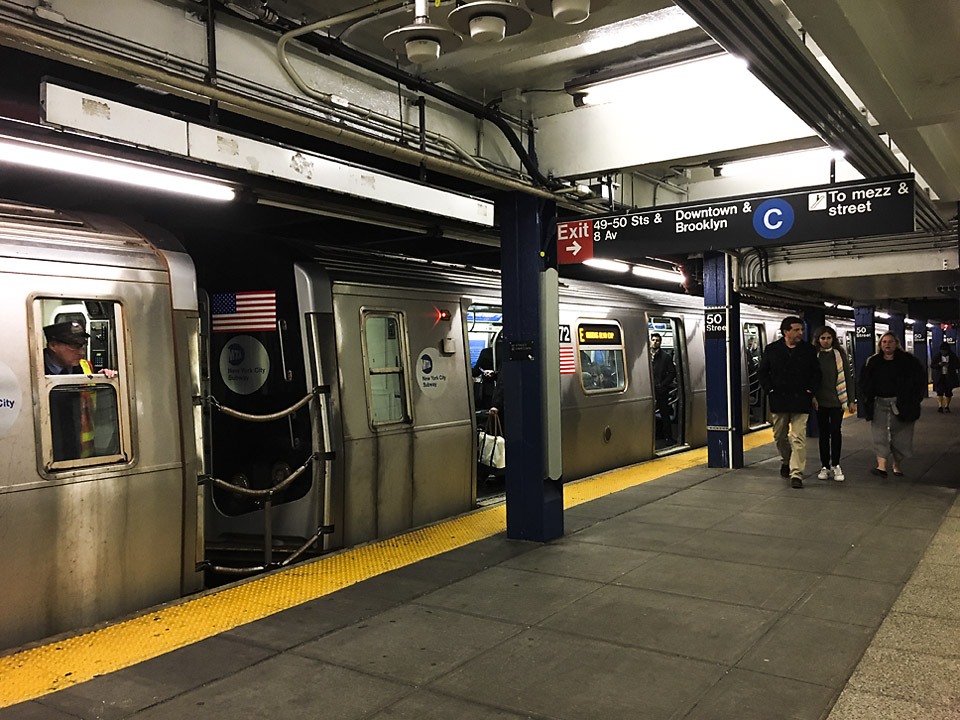 We have pretty much got our neighborhood down.   If we want or need something, we have figured out which direction and how far we need to go to get it.  Well, we now are ready to branch out and broaden our horizons.

The MTA operates the mass transit system throughout New York City.  The subways run not only all around Manhattan, but also crosses the rivers and goes into Brooklyn, Queens, the Bronx, Staten Island and New Jersey.  You can get on the subway and go wherever you want and have a return trip for $2.75.

What is really nice is that they offer a Toll Tag type of card for senior citizens.  We went down to the MTA Customer Service Center with our application in hand to get our MetroCard.  It took an hour and a half, but considering how many people were being serviced, it actually ran well and the MTA staff was very friendly and helpful.  Except for one guy who was a caricature of the mythical “Yankee”.

We walked out and found ourselves in the middle of the financial district.  The Wall Street area.  Here the buildings are tall and massive marble temples, paying tribute to the chase of the American Dream. The streets are narrow and people are walking briskly form place to place.  Yuppie types (if that is still a phrase) were scurrying down the street in their exchange floor jackets emblazoned with their trading house logos on their back, talking into their cell phones.  To me, it was a picture that captured the essence of this generation.

We stopped at the Merrill Lynch charging bull statue.  We couldn’t get a picture of it because of so many people surrounding it taking pictures.  Almost everyone was having their picture taken with the statues testicles.  There is a new addition to this display, “The Fearless Girl”.  This is a small statue of a young girl staring down the Charging Bull.  She will only be in place until February 2018.  The contrast is amusing. On one end, you have this young child making a sociological statement of the economic-political world of today, and on the other end, the crowd is lined up to take a vacation portrait with two gigantic testicles!

This is one of the many destination areas for tourists.  The bull is the 2nd most visited statue attraction in the City.  Nearby is the 9-11 memorial, Clinton Barracks, and the ticket office for Statue of Liberty trips.