We were sitting at our table after breakfast when Jerry looked out the window.  She jumped up, all excited going, “Look, look, a battleship!”  I jumped up, went to the window and sure enough, there in the middle of the Hudson was an enormous Navy ship pulling into the piers.  Soon followed by a flotilla of Navy combat vessels that looked like the PT boats that John Kennedy was on in WWII.

We thought there was something happening related to the bombing in Manchester and the military had been activated.  Maybe there was a plan to attack New York.  We quickly turned on CNN and there were 4 talking heads, pissed at Trump, and one defending him.  We went to NY1 (a local New York City cable news channel) and found out what was happening.

It wasn’t an enemy attack….it was Fleet Week. Every Memorial Day weekend, The Navy comes to town, opens up their home for the public to tour and puts on exhibits for the public to see the military equipment and how it works.

We were touring the USS Kersarge.  This is an amphibious assault ship. It carries everything the Marines need to go to war.  The first thing that hit me was how huge the ship is. There is enough room to put a couple of football fields end to end in the area down below the deck.  This is one helluva boat! 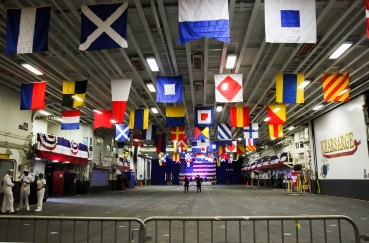 We were greeted and welcomed as we went aboard.  The first exhibit we saw was the automatic weapons the Marines carry with them.  The latest version of the M-16, the .240, the SAW and the .50cal machine guns.  We were able to crank the sighting wheels on mortars, we stood next to a 155mm Howitzer, we watched 3D printers produce replacement parts, and we were impressed!

We watched hand to hand combat exhibitions.  The soldiers were young, strong and fast.  And they were good.

We walked around a landing hover craft that delivers troops from ship to the shore.  We climbed into the attack tanks and transport vehicles used in combat.  All of this is under the main deck.  We were 2 levels down.

We proceeded up to the deck level.  Here it looked like an aircraft carrier.  Dotted across the deck were several helicopters on display and an Osprey aircraft. The deck was long and flat.  It had runway markings painted it.  The surface was extremely rough, probably for traction for the aircraft while at sea.

Jerry got into the cockpit of one of the attack helicopters and looked every bit the part of a combat helicopter pilot.    I got into the Osprey.  Bumping my head and banging my knee didn’t leave me feeling much like a combat pilot….but in my Walter Mitty imagination….I was launching a mission to save mankind.

While we were touring the ship, we saw 1000 Marines in their khaki and blue, and 1000 Sailors in their Popeye whites heading into Times Square for shore leave.  Uh oh!

There is so much to see that it’s difficult to describe it here and do it justice.  I think we will just post photographs and let the pictures to the talking.

There is really only one way to sum this up….It’s Fleet Week!

One thought on “Fleet Week”