The Guggenheim is not your traditional art gallery. No large open square rooms with a single painting centered for viewing.  On this day there was none of the non-sensible art like a single light bulb hanging in a room over a pail.  For me, the difference started with the architecture itself.

The building was designed by the famous Frank Lloyd Wright, a true artist himself.  Though it is several stories high, the Guggenheim has no stairs or escalators leading to the top, the experience is to travel upward along a wide circular ramp, open in the center with artworks displayed along the outer wall.

Guggenheim looking down from the top

The current display connects the progression of modern art, moving from the realism of the European masters, to the more informal work of the impressionists, the move to representative art and on to abstract, surreal and nonobjective. The exhibit communicates how that progression occurred and how it was influenced by photography, sculpture, and the convergence of cultures.

Tip needed a lesson.  Old European art was limited to realistic styles and was limited to the subjects it represented.  Art containing the activities of everyday people was considered crude. 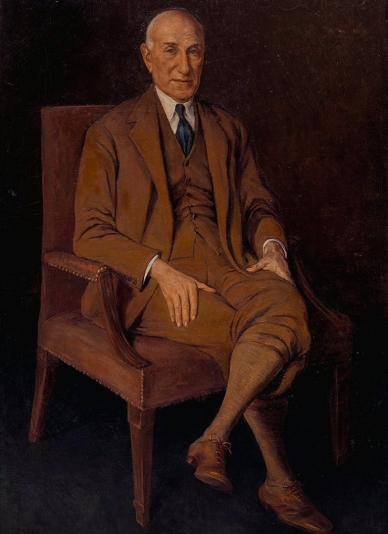 Portrait of Solomon Guggenheim in the Traditional style

Modern art expanded to new subjects, especially everyday life of commoners. The style was loose and suggestive rather than realistic.

With the the progression of looser styles, subjects became less recognizable, so as to only suggest their existence.  Abstract art may look like unrecognizable shapes, but shapes and lines are used to represent actual objects. 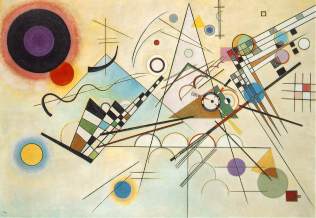 Nonobjective art has no representation of reality, it is simply composition of colors and shapes and their interaction.  Any representation comes from the viewer.

We were both left with an appreciation of the beauty and functionality of the building.  I liked Kandinsky, Tip liked these spheres by Russian constructionist Naum Gabo.

At the end of the day I was left with new inspiration and renewed appreciation for the art.  As for Tip, he is still talking about the tough bread on the sandwiches.