We didn’t have much time.  We had left Penn Station earlier, after a 2 hour delay, on a train destined for Washington DC.

Train travel is a really nice experience.  We seemed to be rolling and gently rocking down the track.  You can get up and walk from car to car, going to a car set up with tables or one with drinks and snacks.  The staffs are friendly and helpful.  It’s just a comfortable way to travel.  We read.  Jerry was reading Ken Follett.  I was reading Al Franken’s “Giant of the Senate”.

New York to DC is about 250 miles, about the same from Dallas to OKC or Dallas to Houston.  About a 3½ hour drive.  Train time, car time, plane time.  I think it’s all about the same!

We made stops in Newark, Wilmington, Philadelphia and Baltimore.  But only for a few minutes.  We arrived at Union Station.

When we entered the subway part of Union Station, we were blown away.  The platforms were wide, clean, well lit, with clearly marked signs.  A lighted board had a schedule of incoming trains and how many minutes until they were to arrive.  The New York subways are impressive, but clean and lighted is not how they are described.  This was only the beginning of how Washington impressed a tourist.  Jerry has posted her take on how Washington has changed over the past 45 years.

We stayed in the Southeast part of DC, the Navy Yards.  We were across the street from Nationals Ballpark.  This area was a run down, crime infested area in the past.  It is now being urban renewed with high rise apartments, restaurants, and shopping areas. About the only “old” buildings left in this part of town are churches. Our hotel was new and the staff was helpful in every way imaginable. 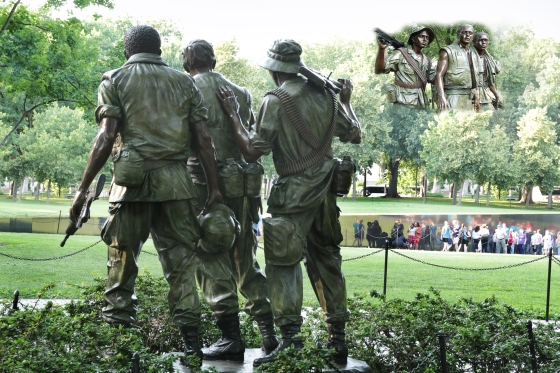 We were limited on time for sightseeing but we did get to see some sights.  I scratched an item off my bucket list.  We visited the Vietnam Wall.  I was looking for a name.  In 1971 I had to write a letter for the CO to the mother of a guy we lost.  I wanted to find his name, touch it and say a prayer.  I wasn’t able to find him.  Apparently I have mis-remembered his name.  I felt guilty and ashamed of not having proper respect.  I have thought of him and his mother every Memorial Day, every Veteran’s Day, and every national anthem at baseball games for the past 47 years.  I found peace in the statue of the 3 grunts who are over looking the wall.  It was an emotional experience!

We covered the west end of the mall, seeing the WWII memorial, Washington Monument and the White House. Things have really changed since we were here in 1974.  You don’t walk down the sidewalk in front of the White House anymore.  It’s barricaded with anti-ramming pillars, armed Secret Service agents in SWAT gear and steel gates.  It’s like your nearest access is a ballot box every four years.

We went back the next day to take a tourist bus tour, one of those open double decker

jobs with the narrator who has “inside stories” about the city.  This took us on a 2 hour ride passing all the sights.  We caught glimpses of the Capitol, the White House, and Jefferson, Lincoln, Washington, FDR and MLK monuments, museums and the Ford Theatre.  It was a hop on-hop off tour, but time did not allow us to hop off.

We decided we had to come back to give DC the time it needs and deserves.  The Smithsonian will take several days on its own.  So we left to catch our subway and trains to take us back “home”.  We leave with the same feelings that brought us to New York:  We just didn’t have time to see it right!

2 thoughts on “Our Nation’s Capital”