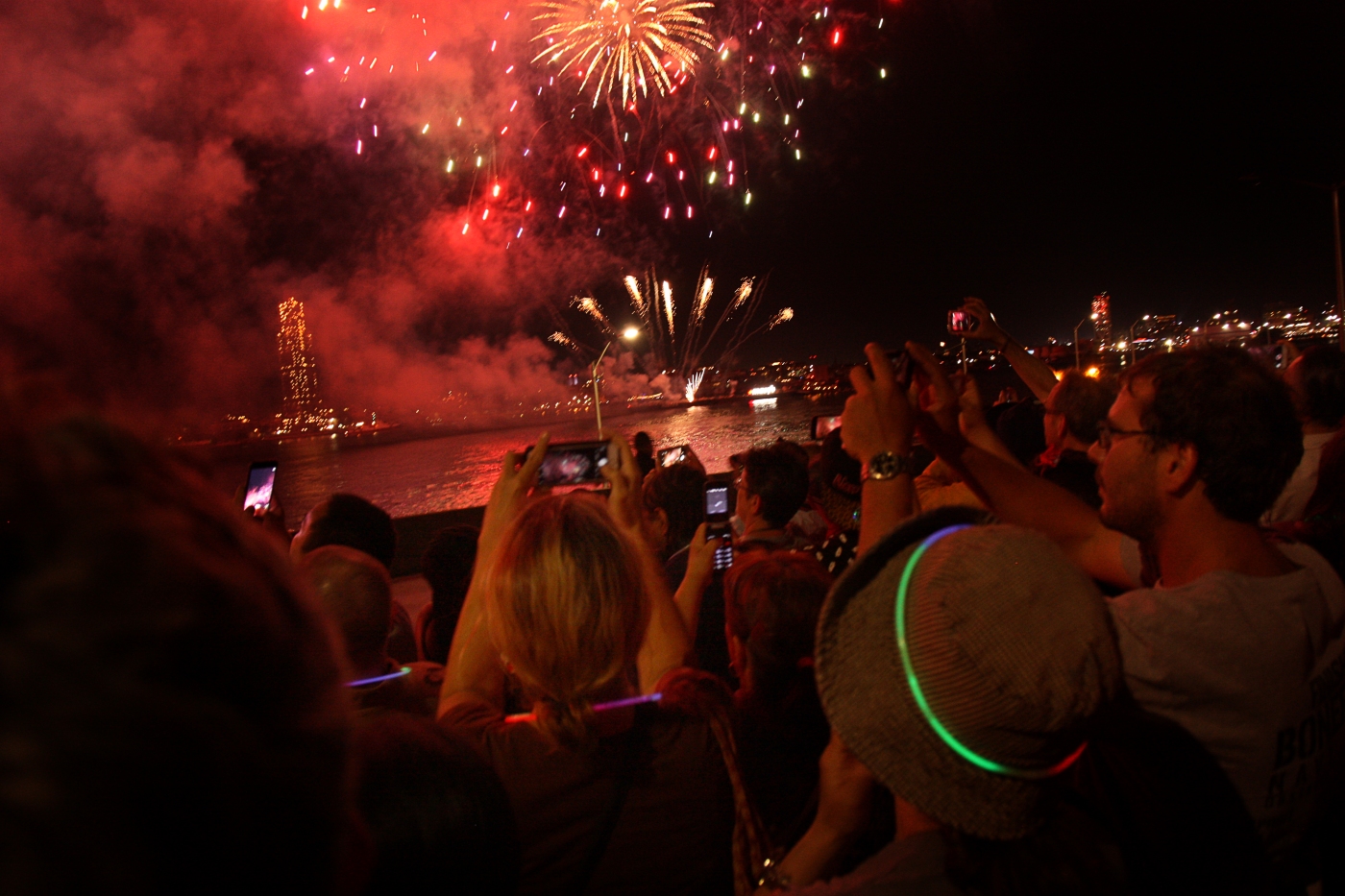 We had a list of things we felt were obligatory for anyone spending only a year in NYC. 4th of July fireworks, Macy’s Thanksgiving Day Parade, and New Year’s Eve in Times Square. One down.  We will decide on the others later.

This week Joyce Wright, a dear friend is visiting us from the Metroplex.  We have been walking all over Manhattan together at all hours of the day and night. It is fun sharing this 4th of July adventure with our friend from home. 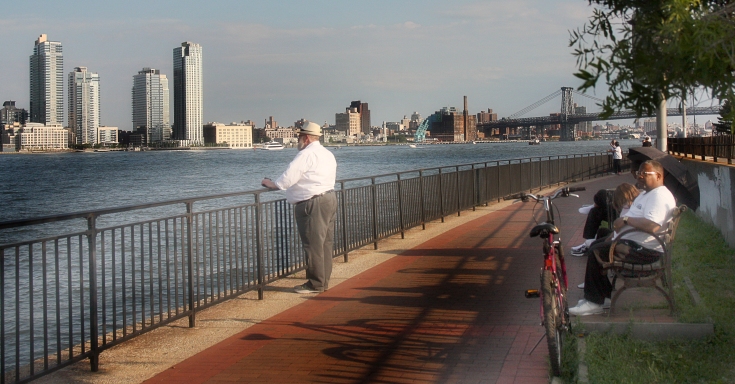 We found an empty park bench on the promenade next to a shade tree, pitched our “camp” and started our wait while enjoying the cool breeze from the East River and the shade of the tree. We, and others nearby were basking in the glory of our successful planning.

It didn’t last long.   This is where we discovered the flaws in our plan.  Soon the NYPD came along and told everyone to vacate the area.  It was being reserved for people in wheelchairs.  So, we packed up and followed his directions to exit.  We found ourselves in a group awaiting the opening of the designated observation area.

This is where we met up with the other people who were also looking forward to the fireworks.  Estimates of the crowd were between 2 and 3 million people.

Portions of FDR Drive were closed and parade barriers were placed along the way. For those of you in Texas, it would be like closing Woodall Rogers from I-35 to 75 Central and flooding it with people – with the density equal to the floor of a rock concert.

We settled into our new camp on the concrete.  Did you know that the concrete on the highways is not smooth?  It is rough and grooved, probably good for water drainage.  However, it is not made for comfortable sitting, and, it had absorbed the heat of the afternoon sun. But we only had a 2 ½ hour wait!

As the afternoon passed we watched the Brooklyn skyline slowly light up.  Those on the Brooklyn side of the river watched the Manhattan skyline come to life.  A formation of NYPD helicopters did a low fly-over along the river, and their boats combed the shoreline in an effort to keep the area secure.

Darkness gently arrived and we watched as 5 barges anchored in the East River between the Brooklyn and Manhattan Bridges.  Huge, flat barges.  Two FDNY fire boats cruised the coast shooting high arcs of red, white and blue water into the sky.

And then!  Five rockets, leaving trails of sparks, shot high into the air.  One rocket from each barge, exploded into a cascade of sparkled light. And then, it all began.

Fully synchronized, each barge set off their charges in an all-out assault on the senses.  Rockets shot up, exploding into ribbons of sparkles and lights, only to explode again into more streams of sparkles and lights, all cascading down into the river.  Boom after boom, it continued for 30 minutes until the smoke blotted out the Brooklyn skyline.

What made this show truly spectacular was the synchronized displays from the five barges.  With perfect timing sparks from the 5 barges created a visual dance putting this show into VistaVision.

For me, it brought thoughts of Francis Scott Key, standing on the deck of that British frigate watching the shelling of Ft McHenry in 1812.  The evening made me feel very American!