We decided to have a goof off day and go to Coney Island.  Like little kids, we were excited.  We couldn’t wait to get there.  Cause it was Coney Island.  There is Disneyland and Disneyworld, Six Flags and there is Coney Island!  The Granddaddy of all amusement parks!

The Beach, the Boardwalk, Nathan’s hot dogs, the roller coasters, the carnival games…and Zoltar!  It was all waiting for us and we were heading its way. 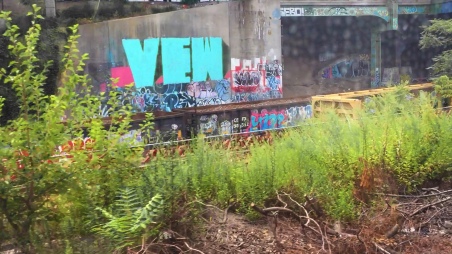 On the subway ride through Brooklyn we were treated to a graffiti show along the tracks.  This is one of the more prolific displays of this art form we have seen in the City.  Every possible surface is covered with unreadable writing in super colorful spray paint.  Each a work of art in their own way.

Our subway ride ended at a large station.  It is always interesting when you walk out of an unfamiliar station.  Not sure if you are facing east, west, north or south, or what to expect of the surroundings, it takes a moment to orient (Sometimes I wonder if this is how gophers feel).  With this station it was clear where we were.  Walking through the station doors we saw the Coney Island sign hanging in the foreground of brightly colored amusements.  Across the street was the famous Nathan’s Hotdogs. 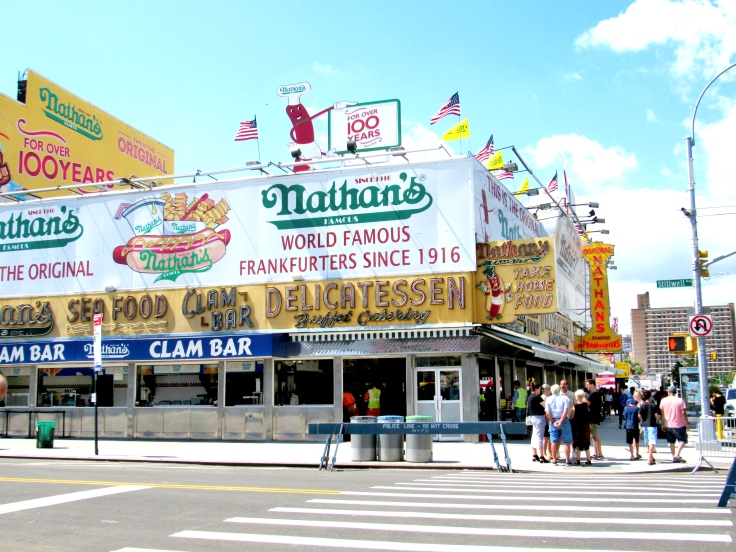 Coney Island has been around since the early 1820’s in some form or another.  It has gone through many reincarnations over the years rebounding from financial ups and downs, real estate speculation and political posturing.  It has been bulldozed several times, whenever the amusement park would fall into financial hardship, neglect and disrepair causing the park to close.

Fred Trump, Donald’s father, owned the property in the 1960’s. He was wanting to develop a large apartment complex and was speculating on the property.  He acquired the park, knocked down the buildings and began to promote the development. However, he was unsuccessful in getting the property rezoned for apartments, eventually gave up and sold the property.  It started rebuilding in its current state in 2003.

Coney Island is primarily a beach, a long sand beach where average New Yorkers do their “go to the beach” thing.  Young children play in sprinklers, teenagers dig deep holes and build castles while adults lay out on beach towels.

The boardwalk is an actual wooden sidewalk, about 15 feet wide, running the length of the beach area.  You can’t get under it in case you were wondering.  That must be a different boardwalk.

Across the boardwalk are a few square blocks of thrill a minute amusement park rides and roller coasters.  Carnies bark from the midway games challenging passersby to try their luck to win a stuffed teddy bear.  Souvenir shops carry the T shirts, caps and other typical Coney Island trinkets.

In addition to the rides and arcades, there is an area called Coney Walls.  These are walls where the best of graffiti artists are invited to display their craft.  The walls stand like islands in a gallery displaying a different art, in a unique gallery. 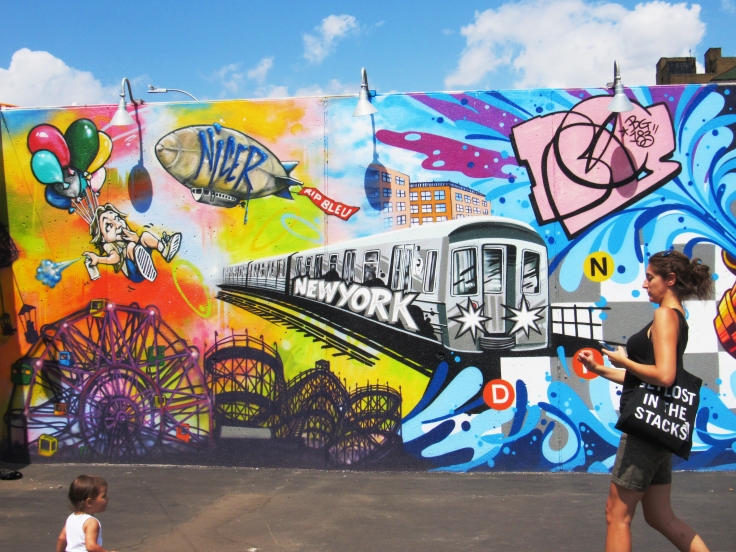 The restaurants, topped by Nathan’s hotdogs, offer to satisfy the hunger of the beach combers.  We had Nathan’s Coney Island dog (of course) with chili, cheese, mustard and relish.  And we had a side of cheese fries with bacon bits.  It was really good, and it was really messy!

The roller coasters are state of the art.  The rides climb the rails straight up and then drop straight down before taking off on twists and turns.  Half of the ride is spent upside down.  Back in our day, we could have ridden these rides all day and all night.  Today, just watching made us queasy and feeling that we needed some water.

And then we met Zoltar!  Sitting on the side of the midway area was the glass enclosed fortune teller featured in so many movies.  We slid a dollar into his slot, he twisted and came to life.  He pronounced his reign over all that is mystical and spit out our fortune card from a slot in the front of the machine.   His fortune prediction was eerily accurate.

Coney Island is, no doubt, a refuge from New York City.  Laid back and relaxing, away from the hustle and bustle, the noise and crowd of the City.  It was a nice day to be a kid.  If you get a chance a have a kid day for yourself?  Go!  Take it!  It’s fun! 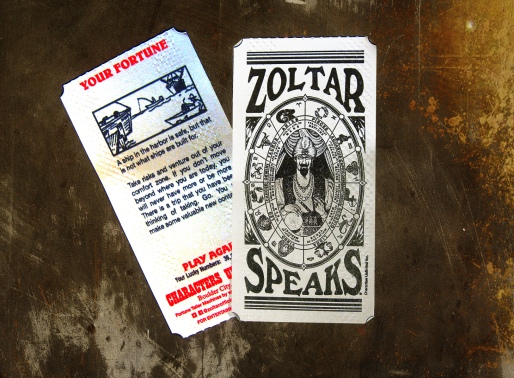 4 thoughts on “Our Trip To Coney Island”