We were walking down 48th Street in the Theater District when a poster caught my attention.  In bold black letters on a simple white background it read:  Springsteen on Broadway. My heart jumped.  Suddenly, I had a mission.  When we got home, I started googling and there it was. Bruce was bringing a Broadway show to the Walter Kerr Theater, a really small, 960 seat theater just a half block west the madness called Broadway. Only a few blocks from our window.

When we were planning on coming here back in the winter, I was thinking it would be especially cool if we could get a chance to rock on with the E Street Band in their backyard.  Madison Square Garden or Met Life Stadium, it wouldn’t matter.  Seems everybody plays better at home.  But this was better than an arena or stadium show.

I went online, filled out the anti-robot app and waited.  Our number was drawn and we were given a 2 hour window to place an order before the ticket offices opened. When we finally got through, I couldn’t believe our luck of the draw!  The screen spelled it out:  Center Orchestra, 9th row, seats 7 and 8.  Somebody is watching over me!  Little Steven Van Zandt entered just before curtain.  He was a few seats to our left in row 7.

The show was Bruce, his guitar, his harmonica and a piano.  Patti joined him for a couple of numbers.

Springsteen is known for narratives in his concerts.   He is a master story teller who has spent decades introducing his music with moving, sentimental and connecting tales.  His stories give life to the music.  If you’ve been to an E Street show, especially in the early 80’s, you know what I’m saying. 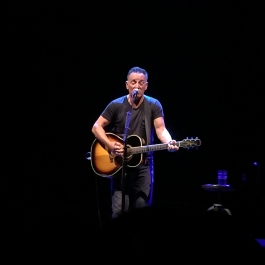 Coming off his autobiography, Born to Run, His dialogues revealed the heart and the soul of the man who wrote the songs.  Growing up in the shadow of the church, his tree, the love for his father, his family, respect for veterans, his friends, Danny, E Street…..all of it……Bruce laid it all out.

And the Big Man.  Clarence. In 10th Avenue Freeze Out, when the change was made uptown and the Big Man joined the band, Bruce stopped and bowed his head.  The audience stood and applauded loud and long in tribute to the greatest saxophone player in the history of rock and roll.  Rest in Peace, Clarence.  Jake is doing well. 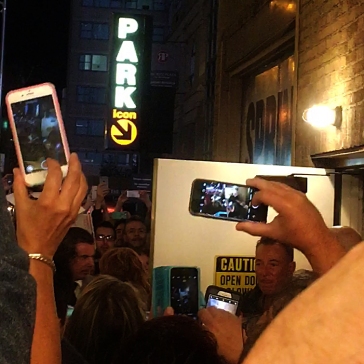 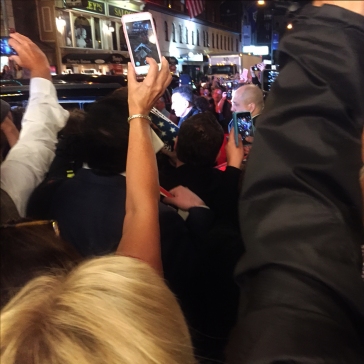 Bruce ended the evening standing center stage with arms extended.  He recited the Lord’s Prayer.  What a way to intro the final song. Born to Run.

Yes, he had a magic trick and we had just watched it unfold for 2 hours!

5 thoughts on “He Said He Had a Magic Trick…”