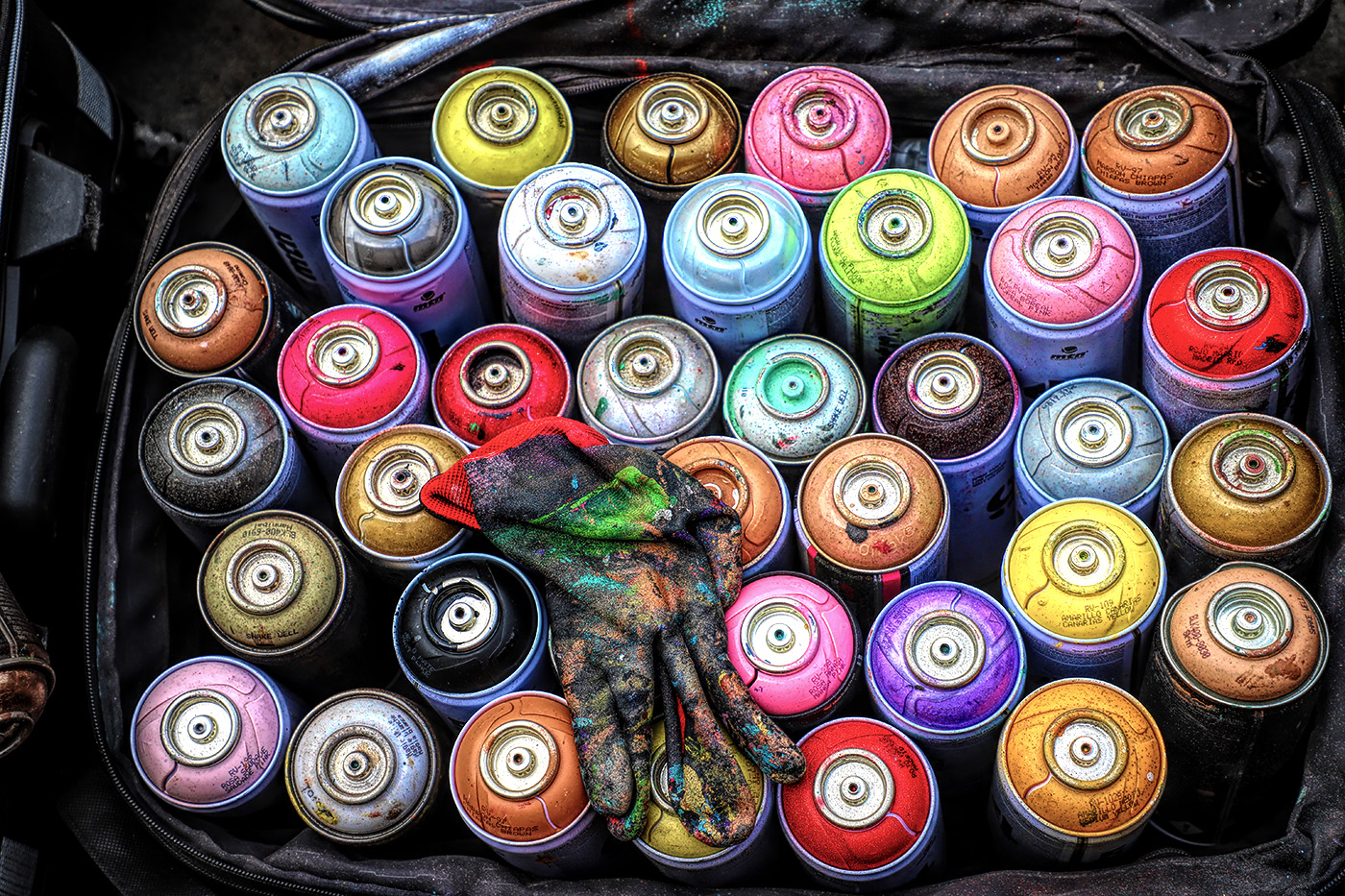 It started with a one mile walk to get to the N train which took us only another mile where we caught the Tram to Roosevelt island. 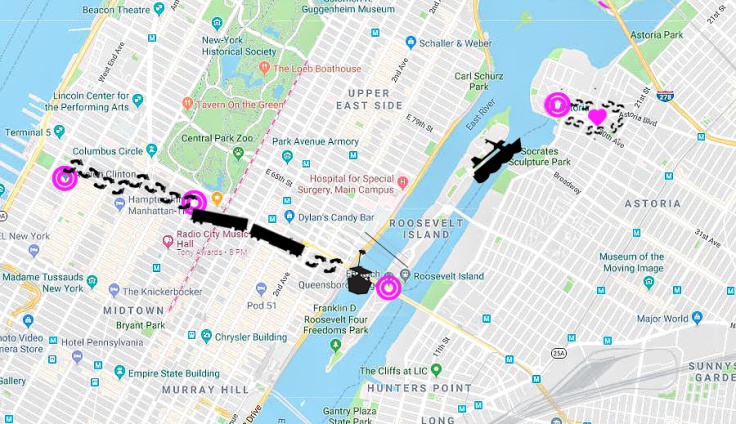 On Roosevelt Island we boarded the ferry to Astoria.  A few minutes later we arrived at Hallets Cove Park near Vernon Blvd and Wellington Court where we found the Wellington Court Mural Project artists at work.

Oh, not familiar with the Annual Wellington Court Mural Project? It is an interesting story. 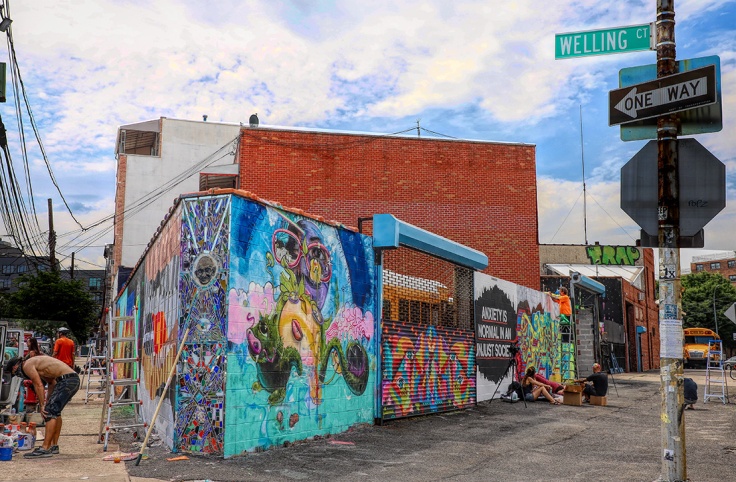 It began 9 years ago when Wellington Court resident, Jonathan Ellis approached a Bushwick Gallery about a beautification project for his community.  Jonathan knew the neighborhood needed paint, and the gallery knew folks who loved to paint on walls.  The first painting went up in December 2009, in the dead of winter. With community support, the project grew one wall at a time. 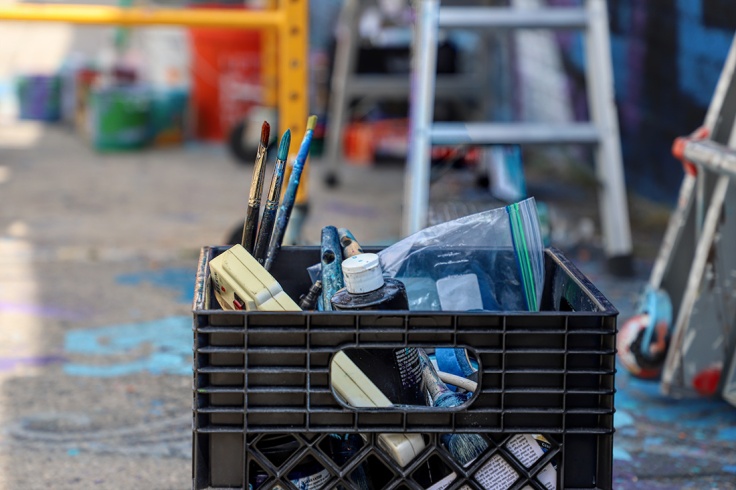 Together, with the help of Ad Hoc Art Gallery, the community and with the publicity of major new sources such as The New York Times, US News and World Report, Huffington Post, NBC Universal, NY1, Brooklyn Street Art, StreetArtNYC, and others, the project continues to grow each year. 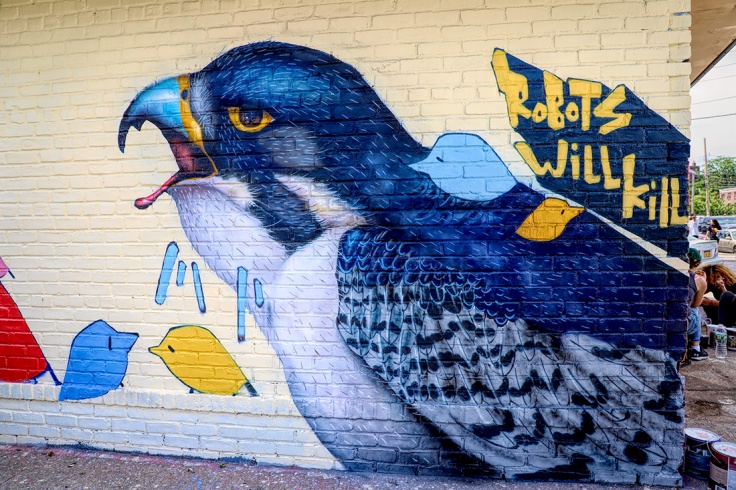 Today the project has expanded beyond Wellington Court into the reaches of the neighborhood.  Actual counts were not clear, but one contributor estimated the number of artists at 135. 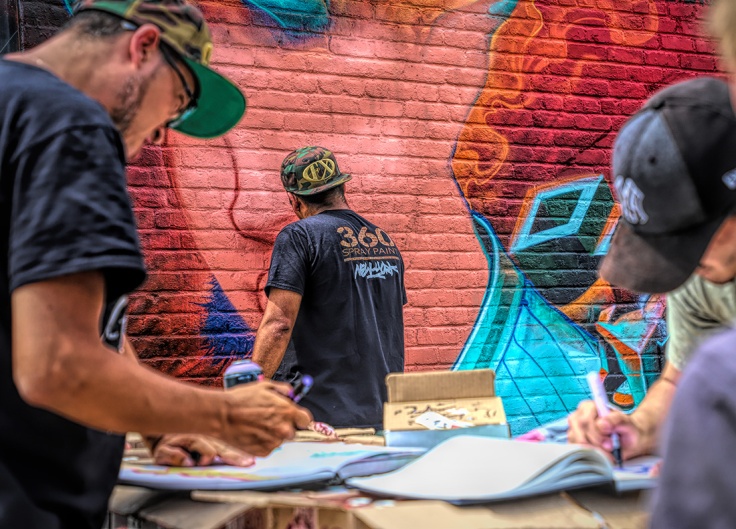 Though it wasn’t easy to reach, the find was worth our effort. Here are some of the people we encountered. 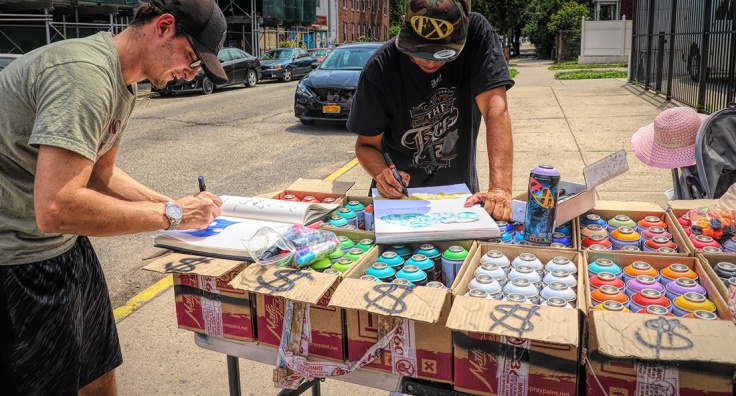 Trace was busy at his spot on Main Street. 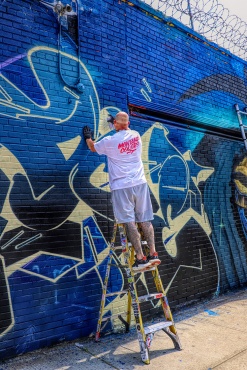 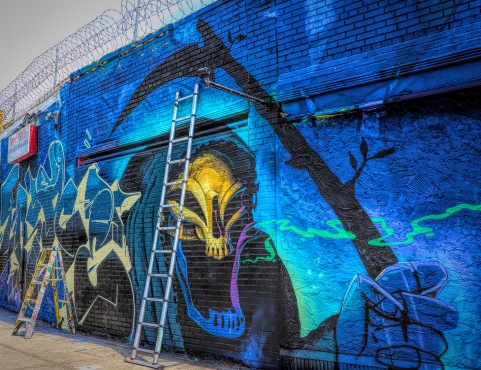 This young man was dedicating his mural to his love and his son. 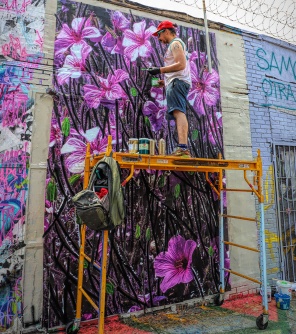 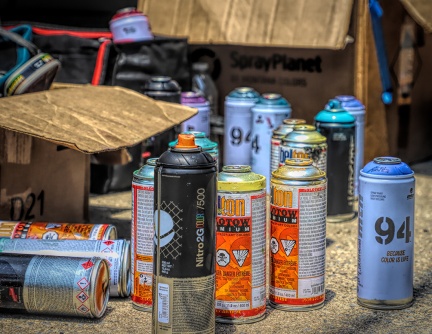 Here we found Joel Artista, Chris Soriana, and Marc Evan working together to create a large-scale mural.  I asked if it had a name and they offered to let me name it, I didn’t feel like I had the right to contribute. 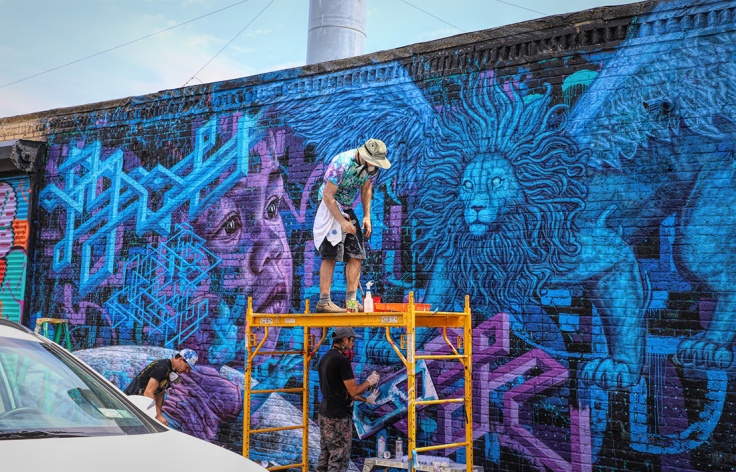 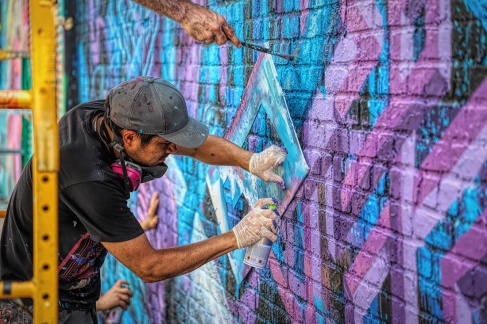 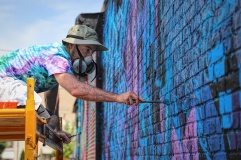 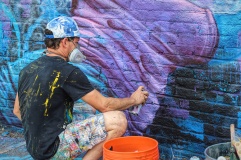 Across the street we found Lexi Bella on a ladder creating what appeared to be the beginning of a large set of eyes. 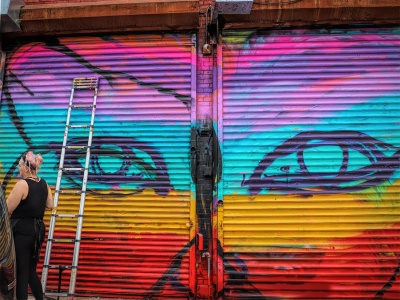 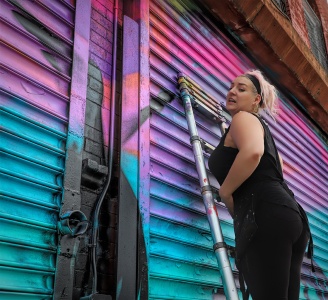 Around the corner Queen Andrea posed for us in front of her masterpiece. 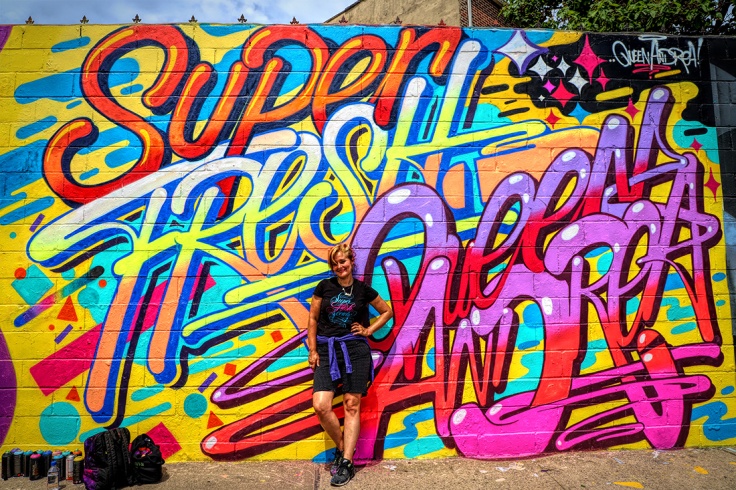 Eventually hunger took over and we began the long trek home. Riding down the East River I began thinking about the nature of this event and the importance of artists, community, and city zoning all coming together.  This seems to be a recurring thought for me lately.  Working together for the better good.  Something we should all consider. 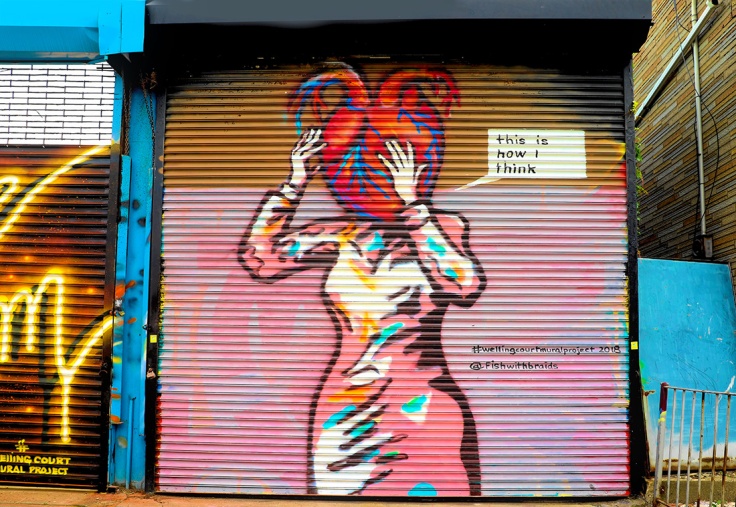 Well I must have been thinking too hard because I disembarked the ferry too soon and landed on a pier that was nowhere near a subway.  So, we took a bus. 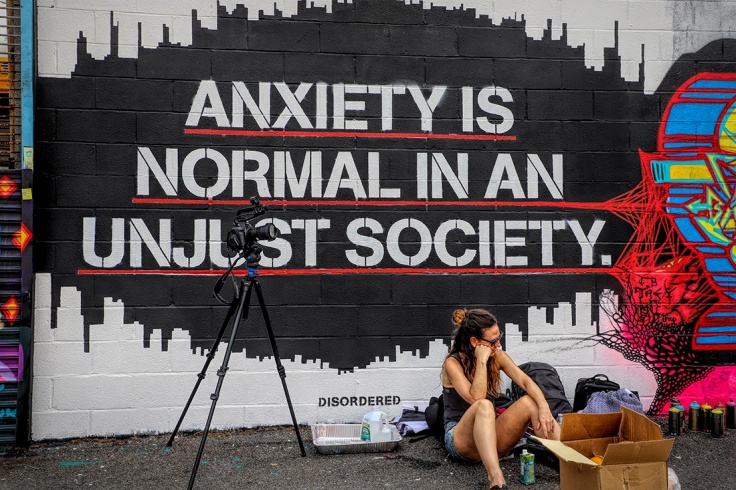 All in all, it was a good day.  How often does one have the opportunity to interact with artists painting walls, walk 3 miles, ride a train, a tram, a ferry and a bus, all in a single day? 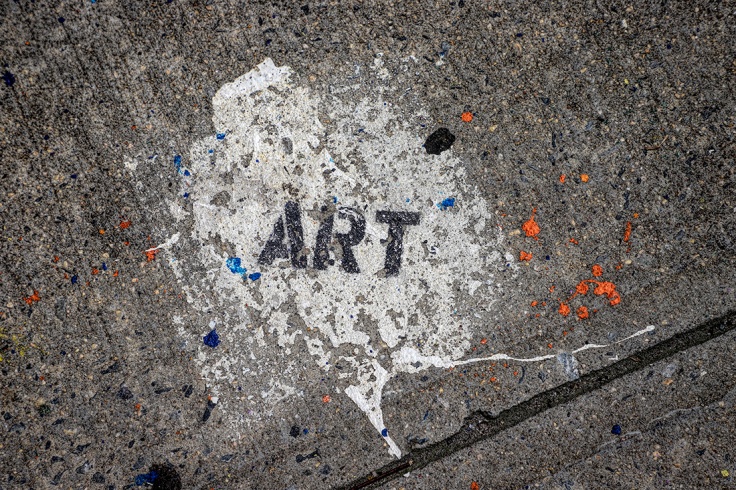 One thought on “Worth the effort”