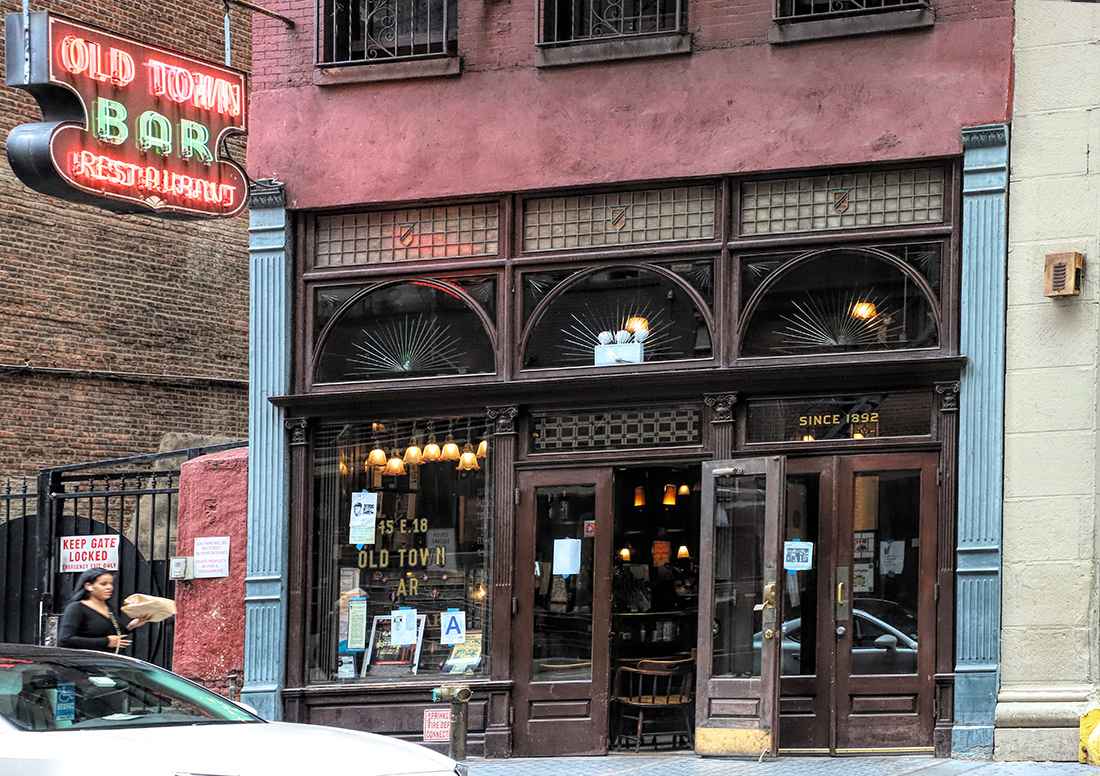 Not far from Union Station, is one of the oldest and best-preserved taverns, Old Town.  We are with our friend Nancy walking along a literary path on Irving Place and 18th street. We pause at the homes of O’Henry and Washington Irving, then turn west to enter Old Town at 45 E 18th street.

Although the name has changed, much of the tavern has not.  It has the simple feel of an ancient bar. Warm and welcoming.  The smooth mahogany tables, long bar, and tin tiled ceilings are still intact. 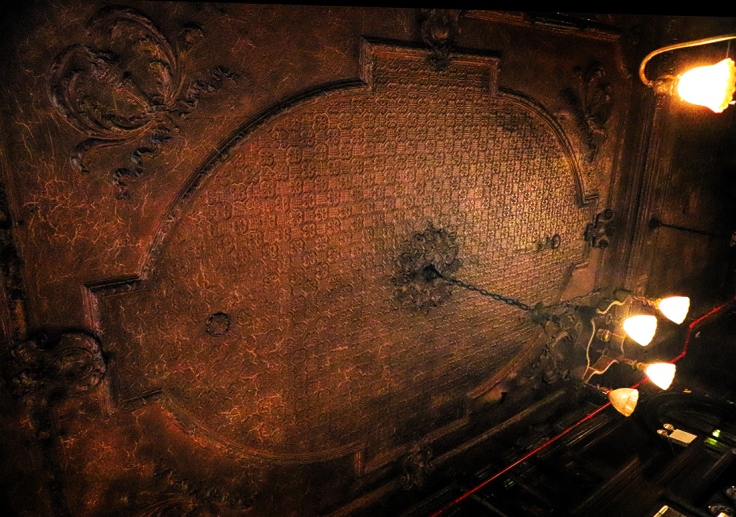 Inside we found a wooden booth, ordered drinks and a large pretzel. Soon we met Andrew.  Andrew loves this old bar and it was clear that he is passionate about its history.  When I asked about some of the historical aspects of the tavern, Andrew was proud to show me around.

First there is the steep stairway leading from the ground floor to the kitchen and the upstairs dining area.  Climbing that stairway makes it clear that carrying food from the kitchen to the main floor could not exist without hazard.

Fortunately, planners had the foresight to include a dumbwaiter between floors. One side is used to move food, the other side returns the dirty dishes.  This dumbwaiter is said to be the oldest in the city.  Andrew showed us how it is still used and simple to operate. 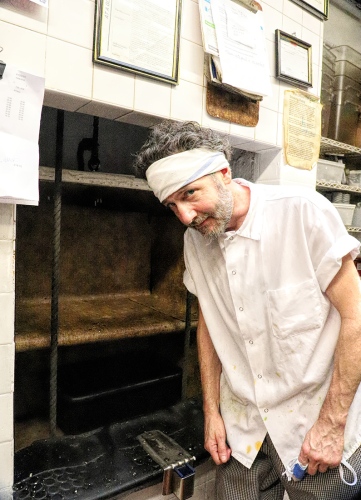 Walking through the upper dining room, Andrew pointed out a framed menu mounted on the wall.  Although it isn’t dated, it is believed to be around the turn of the 20th century.  It had to be long ago.  Most mixed drinks are around 35cents.

Returning to the main floor we appreciated the beautiful porcelain  tiled floor. 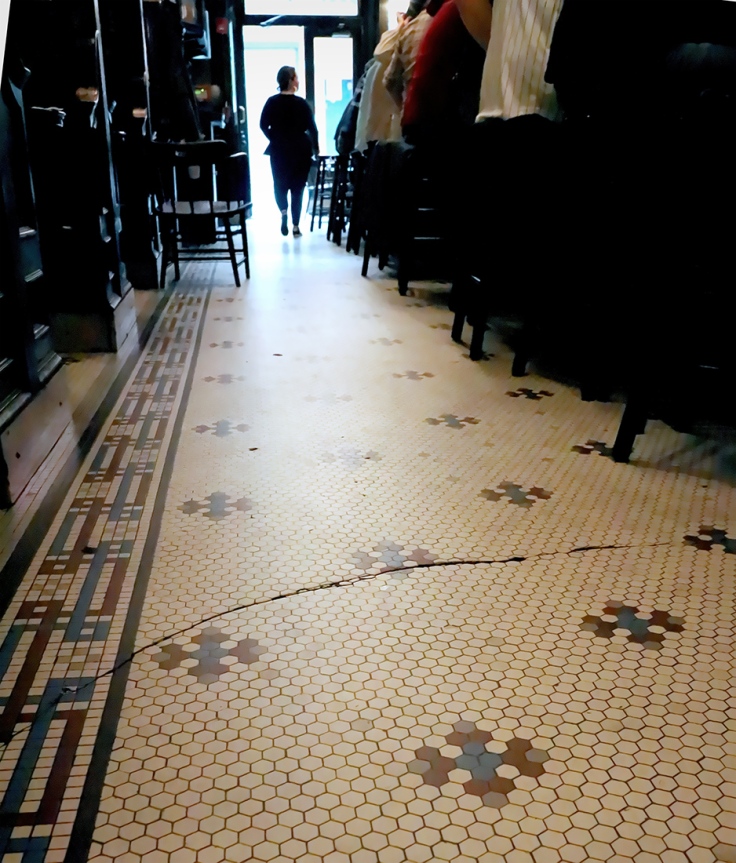 But, Andrew pointed us to another unexpected gem that seems to be the most famous antique within the tavern. The urinals. 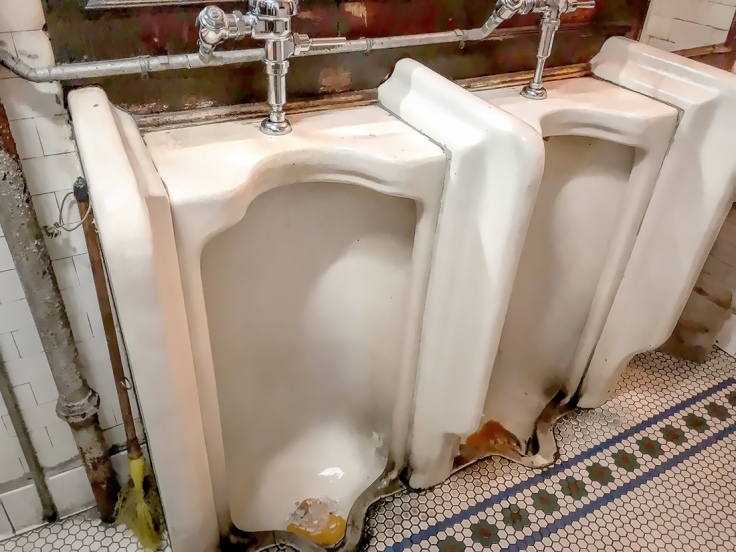 Steve Rushin once wrote in Sports Illustrated, that “the giant century-old urinals of Old Town Bar are the greatest achievements in porcelain since Belleek made its first tea set.”  Research finds many articles on Old Town’s porcelain behemoths.  Noted on the top of these 110-year-old urinals, “1910 Hinsdale Urinals”.  Some have called these the grandest of all.

We also found the ladies room.  Unlike the men’s room, it is located upstairs.  Andrew told us that ladies were not allowed in the early bar, so a vanity was built up stairs for the ladies.

From the upstairs kitchen I watched the giant pretzel I had ordered earlier enter the dumbwaiter.  By the time I scurried down the stairs and found my way back to the booth, the pretzel was arriving at our table.

This cozy bar had all the makings for a favorite neighborhood bar, and with staff like Andrew, everyone feels welcome. 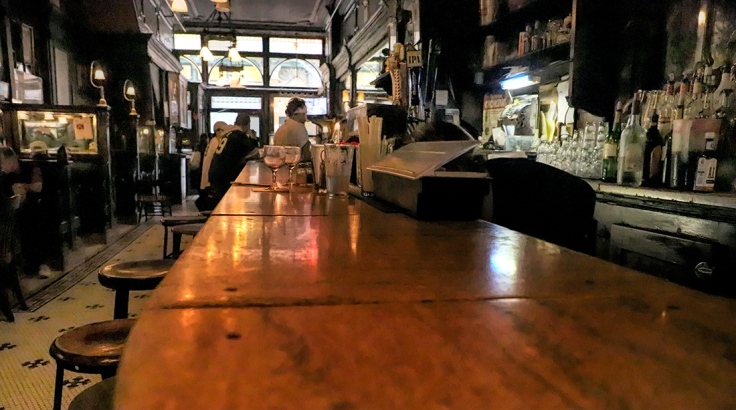