If we have learned anything from this historical bar krawl, it is that facts and dates are substantially folklore, somewhat questionable, and often contended.  Such as  the longstanding argument over which of these historical taverns is the oldest continuously operating.  Most, but not all, agree it is either Pete’s Tavern or McSorley’s.

Pete’s Tavern, located just uptown from Union Square Park, is well-kept, and significantly more upscale than most of the historical taverns we have visited.  Inside and out it was decorated with cheerful fall colors, reminding us that fall has arrived.  The tables inside were covered with white cloths and candles.  Nothing about the room felt of its 154 years. 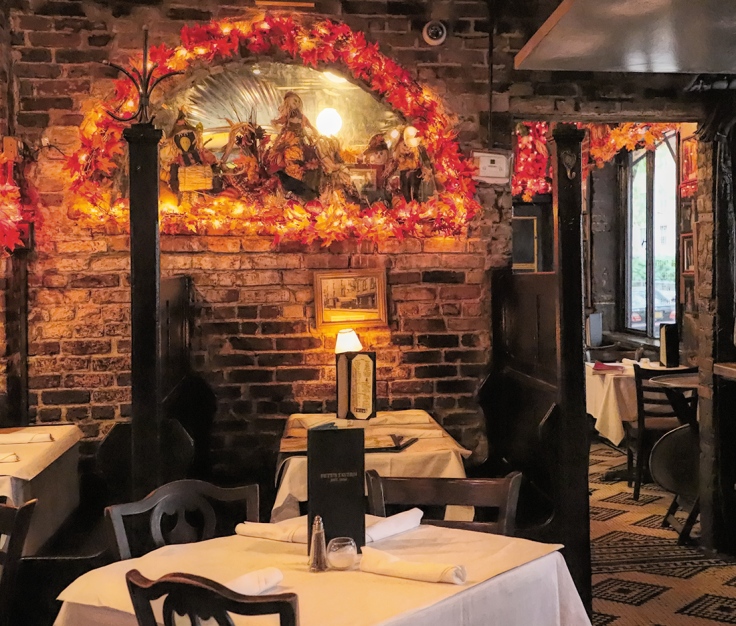 Brick walls and a rosewood bar are original, as are the tin ceiling, tiled floors, and the glass entrance.

Photos of celebrities cover the walls.  At the foot of the stairs is a photograph with a yellow sticky in the lower right corner.  “MGM Roster Stars, Silver Jubilee, 1949.” In the photo are Janet Leigh, Judy Garland, Spencer Tracy, Esther Williams, Gene Kelley and so many more. The connection to Pete’s is unclear.

This bar first opened as the Portman Hotel, later became Healeys, and in 1932 became Pete’s.  It was a favorite of neighborhood laureate, O’Henry, who is said to have written the first draft of Gift of the Magi while sitting in a booth near the front door.   Pete’s is also the birthplace of the beloved Madeleine, by Ludwig Bemelman. 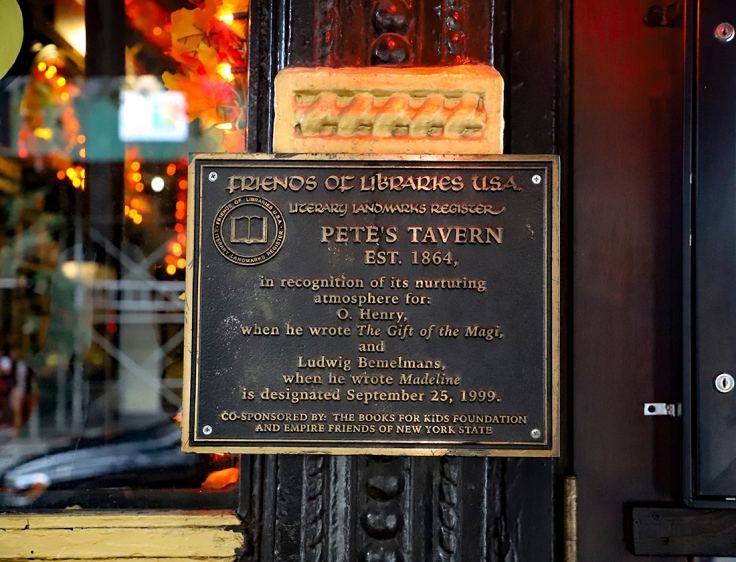 During prohibition Pete’s is said to have operated as a flower shop.  Inside, a refrigeration door led to the bar that continued to operate as a speakeasy. 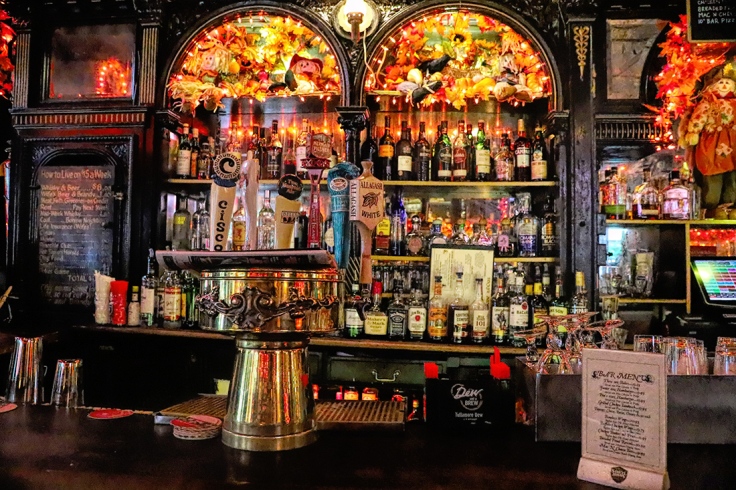 Which brings me back to the debate of the oldest continuously operating bar in Manhattan.  Most of the discussion on this point centers around how the bars operated during the prohibition years.  Most bars admit (insist) they continued to operate, others dispute that the bars were actually functioning as a bar.  One writer said that Pete’s continued to operate under a gentleman’s agreement with the folks at Tammany Hall.  After all, city leaders needed a place to gather and discuss the serious matters of the city.

Setting aside the prohibition debate, there is also the issue of McSorleys.  The date above the door says established in 1854.  At least one historian believes that the land was vacant until 1862.

If the assumption is made that No bar legally operated during prohibition, therefore those 13 years are to be excluded from the discussion, both of these bars would probably lose out to  EAR INN.

So, which of these two popular, famous, and endearing bars is really the oldest?  Perhaps no one will ever know for sure.  But, what difference does it make?  Both establishments have served their neighborhoods through good times and bad, they have grown with the community and continue to provide a place for friends to gather for suds.