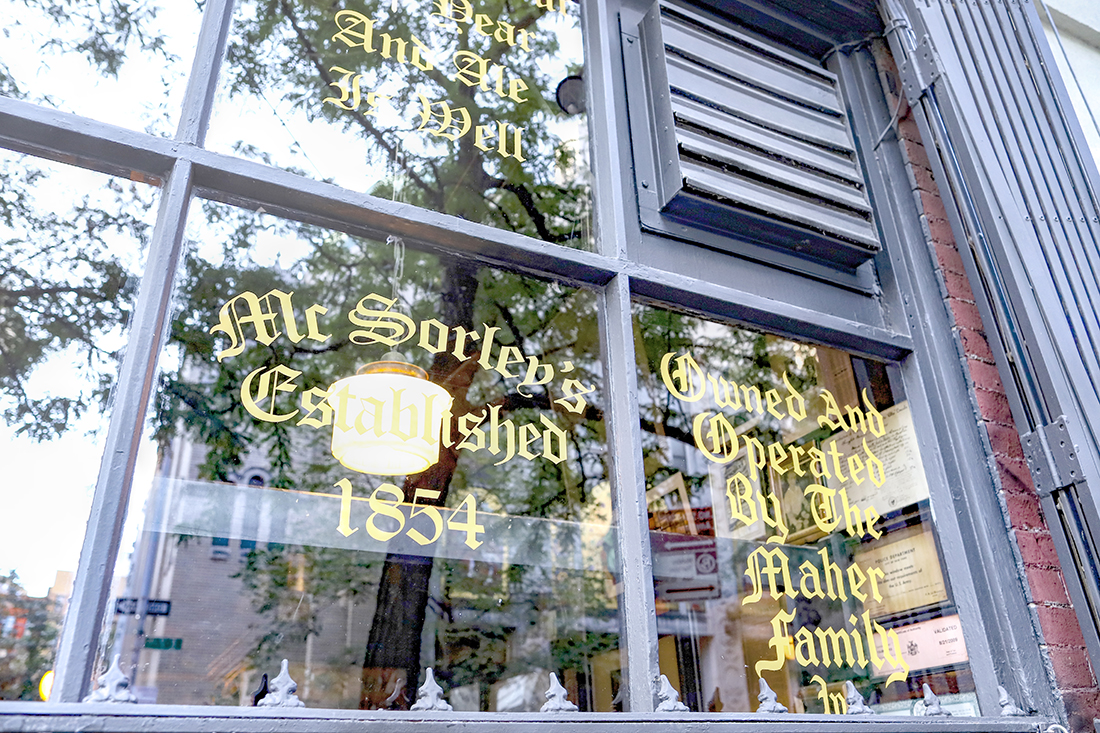 We are krawling to McSorley’s and we are not krawling alone.  We are accompanied by two of our dearest New York City friends, Justin and Lynn, also known as the MadhattersNYC.  More on them later.

McSorley’s Olde Ale House, 15 East 7th Street, is the oldest Irish tavern in New York City. Opened in 1854, it is the 4th oldest tavern in town.  The age standings of these taverns are debatable as is accuracy of the dates the taverns opened.  This 5 story, red brick tenement building sits in the middle of the block on 7th Street.

John McSorley was an Irish immigrant.  He came to America at the age of 18 with his 16 year old wife.  There is quite a debate as to when he opened and how long the tavern has been serving ale.  Most “authorities” agree on the 1854 date, making McSorleys the oldest “continuously operating” bar in NYC.  Pete’s Tavern is a loud vocal opponent to McSorley’s claim, saying that they are older.  That argument has been going on for over 100 years. 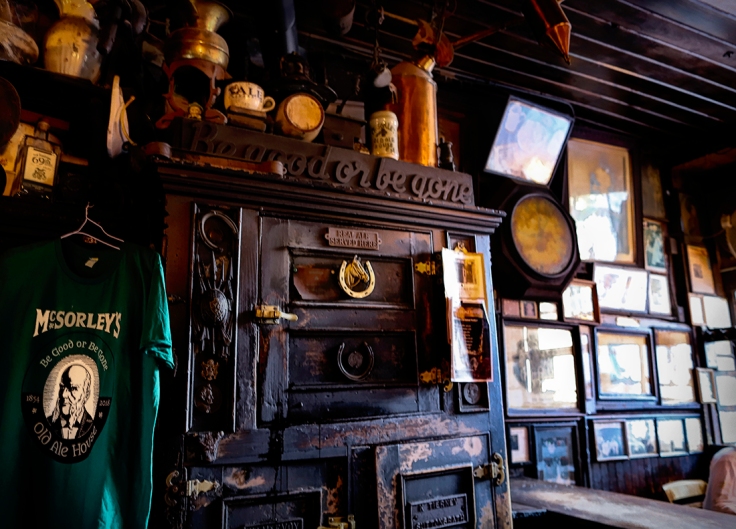 The green beer barrels offer a cheerful greeting at the front door.  The long unpolished and worn wood bar offers beer only.  Liquor is not served or allowed.  Sodas are available for those who shouldn’t be drinking.

Above the bar a row of wishbones hang waiting.  These were placed there by soldiers leaving for WWI, to be picked up on their return after the war.  The wishbones still hanging are still waiting.  Their soldiers never returned. 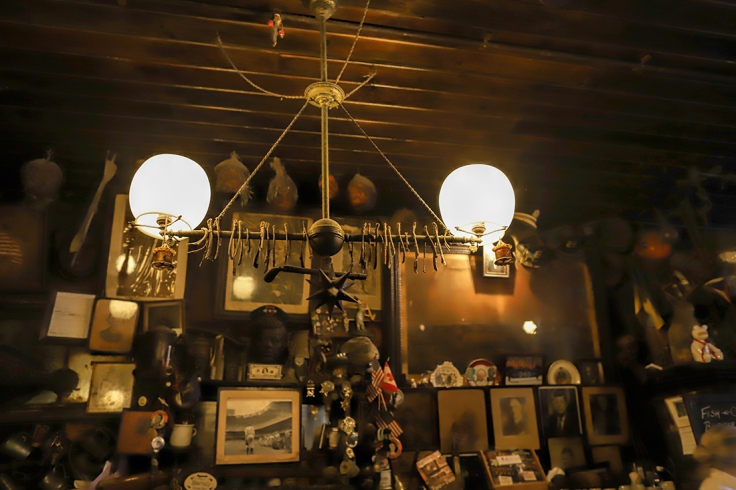 Sawdust covers the uneven wood plank floor.  In the middle of the front room is a large coal burning stove bringing heat during the cold days of winter.

On the rail of the bar a pair of handcuffs are connected to the rail.  These handcuffs belonged to Houdini. Above the bar is a wanted poster for John Wilkes Booth.  A photo of Babe Ruth giving his farewell speech at Yankee Stadium hangs nearby.  It was gifted by the photographer who shot the picture.

The walls are completely covered by all the memorabilia; photos, newspaper clippings and magazine articles.  The walls are a New York City history lesson.  None of this memorabilia has been removed since 1910.

The bar is full, lined up 3 deep. Each patron chugging mugs of beer.  The tables are full. There is no music.  There is no TV.  It is all conversation, and the din is loud. The bar is not full of Irish immigrants relaxing after a day of hard labor.  Today, the bar is full of tourists seeking to touch the rich history of New York City.  There is a handful of local regulars sprinkled in to keep all the tourists from rubbing together.  It is some picture and we encourage you to go see it for yourself.  Narrative descriptions don’t do it justice.

We enjoyed this excursion with our friends, Justin and Lynn.  We met them early on in our time in New York City and have had several meet-ups with them.  They are young, fun, adventurous, and seasoned world travelers.   Today, with our beer, ginger ale and coke, we shared a McSorley’s special appetizer, Cheese and cracker plate.

The server delivered a plate of white cheese and a sleeve of Nabisco saltine crackers.  On top of the cheese was a pile of white onion slices.  So we started snacking.  A saltine, covered with cheese and topped with raw white onion.  Soon, we were talking loudly and blowing our onion-breath conversations on JAM and Lynn.  They didn’t see the humor in it, but Justin and I thought it was hilarious.  Later, Justin came to the rescue with a bag of Chiclets gum.

J. and L. are bloggers who write MadhattersNYC. It is one of our favorite reads.   They describe their blog as   “A Journey to the core of the Big Apple. “This is a love story. A story in which a man and a woman fall in love…with a city. But not just any city. The City.”  For anyone coming to New York, this blog would be a good source for discovering interesting things to do, places to go and dining suggestions.  Check them out here.

McSorleys is located in the East Village.  Nearby you will find Cooper Union and Astor Place.  If it is your first time in the area, we recommend taking a stroll around the block toward 2rd avenue.  This colorful area, full of bohemia, is a delight to walk through.

To get here take the the R/W to 8th street or the 6 to Astor Place (when you arrive be sure to check out the beavers in the subway station – they represent the beaver trade that make John Astor wealthy). Travel east to 3rd Ave, then south to  7th street.  McSorleys is located just around the corner.

3 thoughts on “Krawling to McSorley’s: Day 5”