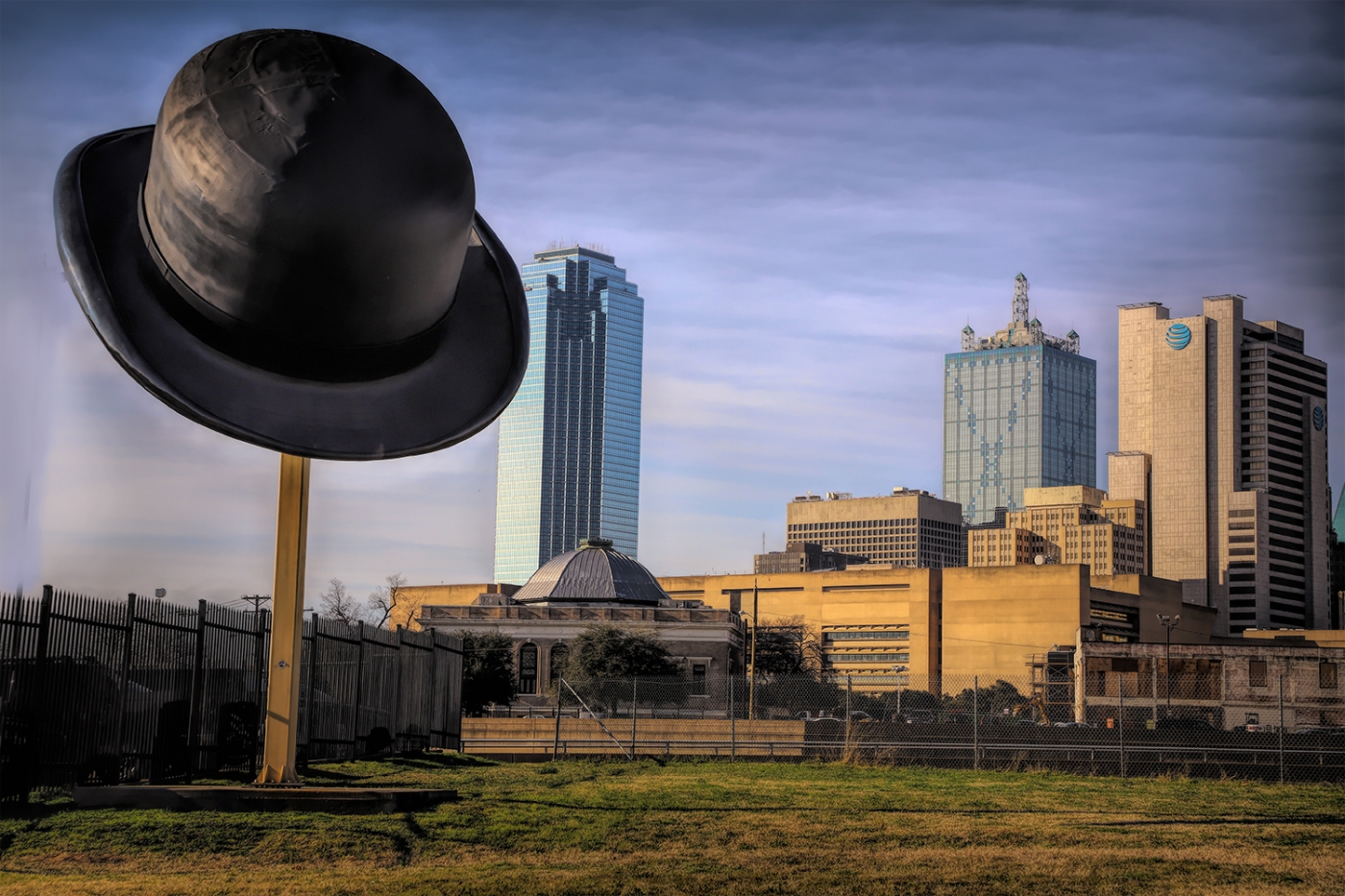 Saddled up, we are back on the trail!   We have finally made some progress in getting relocated and settled.  Today we stepped out to re-discover the Metroplex and our blog.  It’s been way too long!

Inspired by an article found in D Magazine, about a sculpture placed in a re-awaking part of town, we had to go check it out.

“Stanley’s Umbrella” is a 42-foot-tall umbrella, standing upside down on a small median on South Akard Street, in front of the Lorenzo Hotel, a hotel with its own bizarre history.  The umbrella is located at the entrance to the developing area known as the Cedars.  Commissioned by Larry Hamilton, developer of the Lorenzo Hotel, the umbrella was created by Stanley Ray Abbott.

The Umbrella is being derided as an eyesore in some circles.  We disagree.  We found it refreshing and frolic.  Definitely something our world needs in this day and time. Anyone who has spent time in New York City knows the importance of a dependable umbrella and they would have it with them at all times.  This display would be well appreciated  in the Villages, LES, Chelsea or Tribeca.

With the taste of getting back into our blog research fresh on our lips we continued our trek to another controversial work of art.

A block away, in an open field, sits another curious art display.  A Bowler hat perched upon a coat rack.  This bowler hat is 20 feet across and 10 feet high.  In the land of 10-gallon Stetson’s, this English topper holds its own.  Of course, the path it took to get here is an interesting story.

Timothy Oulton wanted to spice up his furniture store, so he commissioned atist Keith Turman to create a  Bowler to sit on top of his furniture store.  After months of sometimes frustrating and uncomfortable labor, the bowler was finished and ready to mount on top of the store.  Well, not quite yet!  There was no permit to install the hat.  After months of lawyers,  permit and zoning variants, denials and several thousand dollars, the city would not allow installation.

Oulton eventually donated the bowler to the Cedars neighborhood group.  It now sits in a field at Ervay and Griffin providing shade to those who wish to have a sandwich during lunch.

Getting there:
The Cedars is adjacent to and south of downtown and Interstate 30, east of Austin Street, north of Corinth Street, and west of the 75 & 345 Overpasses. We found Stanley’s Umbrella as we drove south on Akard toward Griffin. For a more urban route, try the Red or Blue DART lines to the Cedar Station. It is a 7 minute walk east on Bellview then north on Akard.

5 thoughts on “Welcome to the Cedars…”