Zoo York City….I have heard that before.  I hadn’t seen it….. but that was before Saturday!

There is a major happening each year at Coney Island where over 100,000 people show up. It’s the Mermaid Parade!  And we were told it was really interesting.  We were excited, not knowing what to expect.

We got up early, showered and dressed, checked the camera, got the bag ready and took off.  Caught the Q (subway lingo) and headed for Coney Island. At one of the stations, we pulled in and the doors opened.  The R had pulled in next to us.  When their door opened, there stood two pirates.  I mean, these two looked like they sailed with Captain Jack Sparrow!  I thought “Mermaid Parade!” and I began to get really excited.  I couldn’t wait to get across river into Brooklyn.  This was going to be fun!

This was the longest subway ride we have taken.  I learned why you should take the express instead of the local on long rides.  We were on the local and we stopped every other block completely through Brooklyn.  It made for a long trip and a wall to wall crowded ride.

As we neared Coney Island, it began to rain.  It was one of those rainstorms that goes real hard for several minutes and then slows down for a few minutes.  We rolled into the Coney Island/Stillwell Ave stop and got off the train.  And it was raining hard. 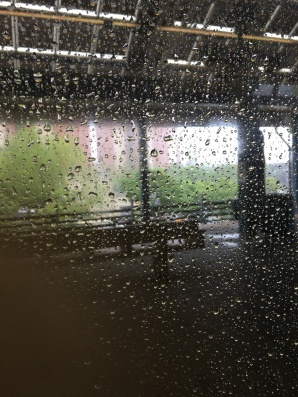 The station here is above ground and has an awning covering, but it’s open with long concrete ramps going to the different levels.  Because the rain was so hard, the 100,000+ (exaggerated number) were crammed under the awnings hoping to keep dry.  Everyone was in some sort of costume and yes, I saw some mermaids.  That’s not all I saw!  There are some things legal in New York that are not legal in other places.

Throughout the jammed concourses of the train station, and I mean shoulder to shoulder jammed, there were groups of mermaids, mermaid kings, and other paraders, wearing Technicolor costumes, covered in glitter, posing for photographs.  Most of them were scantily clad.  Some of them were barely clad.  I kept looking around for “photo ops” for Jerry.  Jerry kept punching me in the ribs with her boney little elbow.  It is legal in New York to go topless, anywhere, anytime and the Mermaid Parade is one of the days this is truly celebrated.

We waited for the rain to break, but it didn’t, so we decided to call it a day and head back home.

The parade was not called off.  We saw some coverage on the news later.  Everyone was drenched but they all appeared to be having fun.

I guess we will have to wait until next year.

One thought on “We Almost Saw a Mermaid Parade”