Join me on my trip to 1964.  Global tensions were escalating as powerful nations flexed their nuclear-powered muscles.  Finding a way to peace was on our minds. In a move to create a #Unisphere feeling, New York City opened its doors and invited the entire universe to the 1964-65 World’s Fair in Flushing Meadows Park in Queens.   The image:  futuristic, the theme proclaiming: “Peace through understanding”.

The Fair became a political game for almost all parties involved.  It was an example of what could be expected from the chaos that we call the 1960’s.  Not supported by the Board of International Exhibitions, the fair became a demonstration of Americas greatest corporations, and the target for accusations of commercialism. 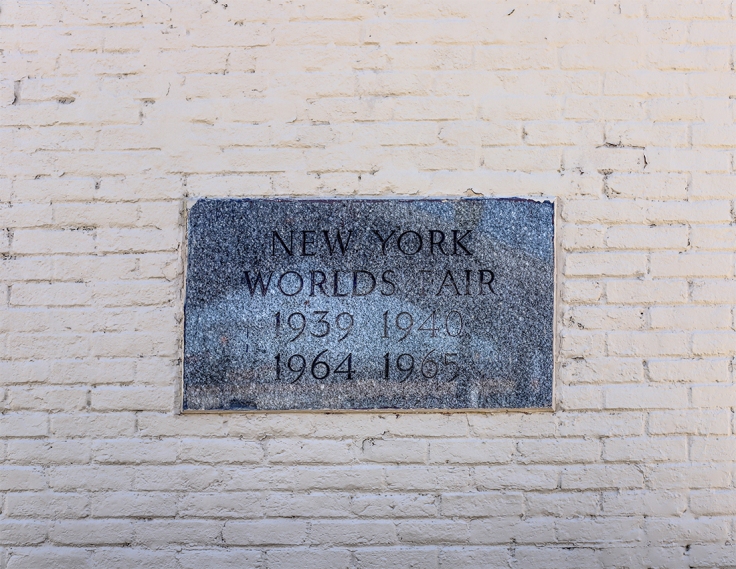 The Fair finished its 2-year run 53 years ago.  Most of the grounds are long gone.  There are, however, some remnants left of the park still standing.  Some repurposed and in use, some abandoned and derelict, the Googie architecture of the park looking like a dated dream, a relic from a distant past. 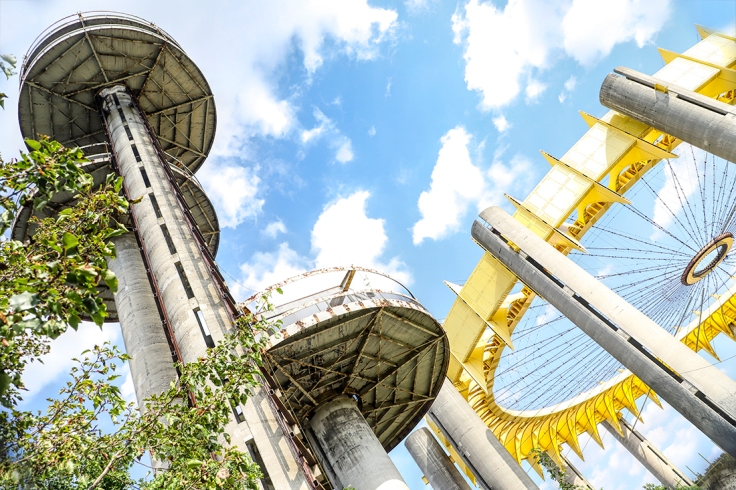 The iconic Unisphere 12 stories tall, 120 feet in diameter and weighing in at 770,000 pounds, the massive steel globe continues welcoming visitors to the area. It sits on the stand of the Perisphere from the 1939 World’s Fair. In the same location from 25 years earlier.

The New York City building has been converted into the Queens Museum. The venue provides space for exhibits, productions, tours, and meetings covering the wants of the people of Queens.

Two notable exhibits from the fair remain as highlights in the museum.  The  Watersheds to Faucets, a regional diorama of the area from the Catskill Mountains to the 5 boroughs of New York City, exhibiting how water is provided for a population of 9 ½ million people.  The drinking water of New York City is exceptional.

The second diorama, and crown jewel of the museum is a scale model of all 5 boroughs of New York.  The model is over 9300 square feet and required more than 100 people working  4 years to construct. Represented are every street, every avenue, every building from Staten Island to the Bronx, and from Hudson to the Rockaways, including parks, rivers and bridges.  Surrounding the diorama are ramps and rails allowing visitors to walk around the boroughs. As daylight turns to dark, the city lights come up to display the iconic NYC at night.  The model is also full of small surprises, such as the airplanes that depart and land at the major airports.  It is also the largest architectural model in the world. 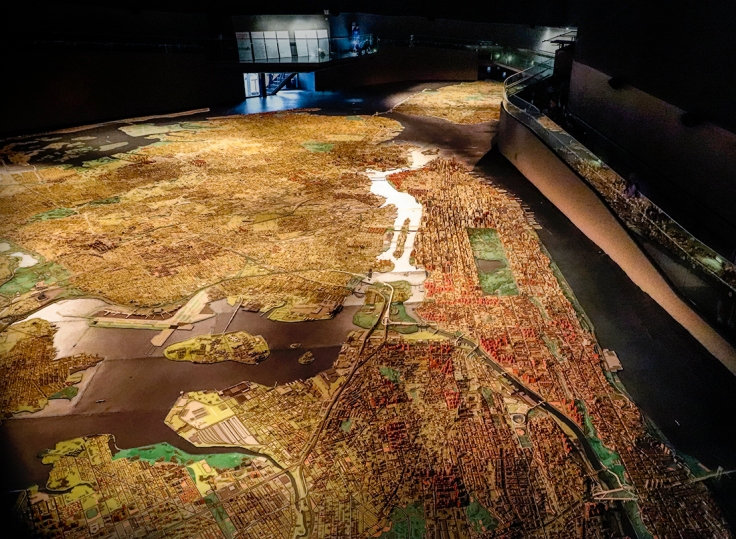 Early NASA Space Race era rockets that were used to carry the early manned and Gemini explorers into space have been restored and sit on “launch pads” on the grounds ready to blast off again.

Sitting alone, away from the surviving parts of the original park is the New York State Exhibit.  It was the “Tent of the Future”.  This $6 million dollar pavilion is where the State of New York played host to the fair and the world.  The pavilion was supported by sixteen 100-foot-high concrete columns. Inside the  pavilion’s main floor is 9,000-square-foot terrazzo tile replica of the official Texaco highway map of New York State.

The pavilion was surrounded by 3 observation towers of the Googie architecture style (think George Jetson’s house), 2 of which had rotating restaurants on top.  Today, the building is abandoned and overgrown, hosting only the nostalgic recollections of New Yorkers who stand in silence reminiscing.

This park that holds memories from another era, remains vibrant today.  It hosts  the annual US Tennis Open, it is across the rail from the Citi Field, home of the New York Mets.  While we were at the park the venue was full of families sharing picnics, children running through the fountain, a wedding ceremony, bicyclers, skateboarders and others.  There is a heartbeat in the area.

This interesting and thought-provoking tour of the Flushing Meadows Park/Worlds Fair and Queens Museum Queens Museum was provided by Keith Michael of New York City Wild.    Keith is a renaissance guy.  He provides Photo walks and informational tours all over New York City revealing hidden sites in the 5 boroughs.   He is quick to share his wealth of knowledge about New York City and can regale you with stories. This was our 3rd walk with Keith.  Blogs on Urban Wildlife (Aug ’17) and Remembering 9.11 in NYC (Sept ’17) can be found on TipandJAMinWonderland.com.

Keith is a “birder”.  That is, he can tell you anything and everything about the fowl of New York.  He is a gallery quality photographer, writes for the WestView News and has published 4 books on bird watching and the history of New York.

He is also a choreographer for the New York Theater Ballet, having created several ballets.  Oh yeah, in his day job, he is the Dance Production Coordinator at Julliard School.

If you are  interested in joining with Keith on one of his walks, and we highly recommend him, he can be reached at newyorkcitywild@gmail.com or www.keithmichael.com.